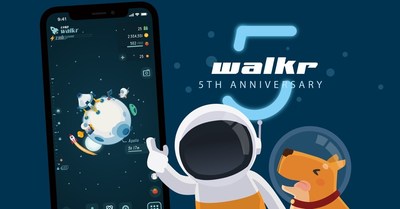 This pedometer gaming app “Walkr” will automatically record each step a user takes, and turn each step into walking energy of launching spaceships, getting a galactic adventure in your pocket by going out with your phone.

Exploring the new planet “Apollo” in 50th anniversary of the first man on the moon
1969 was the year that the first man landed on the moon. Therefore, your small step could be one light year of Walkr. There is a hidden secret of the protagonist of Walkr “Collins”, who is named as a respect for the unsung heroes’ astronaut standing by command module of Apollo NO.11 – “Mike Collins“. This week, in the memory of the 50th anniversary of “Apollo Moon-landing Project”, Walkr has released a brand new planet called “Project Apollo” awaiting for users to explore and collect.

Combination with constellation and local culture, hundreds of lovely & special planets await your exploration
Exquisite art design and interesting game play make 6 million users love Walkr. For example, you could find out about the environmentally-friendly design of stainless steel straw by exploring the “Pearl Harbor” planet based on bubble tea.

Not only can we turn each step into some kind of motivation of exploring the planet via Walkr, but also the inner sensor could analyze our burning calorie. Let’s get into the habit of walking this summer with Walkr: http://walkrgame.com/