AUBURN, Ala., Oct. 10, 2019 /PRNewswire/ — Alzheimer’s disease affects millions of lives around the world every year according to the 2018 World Alzheimer’s Report, but both the cause and cure to the disease remain a mystery to the medical field. Auburn University College of Human Sciences researchers are tapping into the study of food and diets to examine preventative measures, possible treatments and even potential cures to the disease. 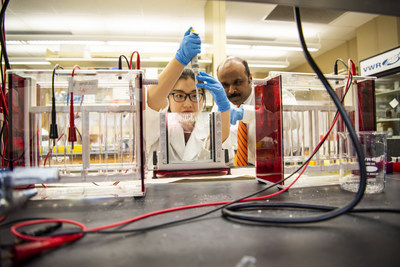 A promising avenue of research delves into the topic of meal-timing, which nutrition doctoral student Lauren Woodie studies in the lab of Associate Professor of Nutrition Mike Greene. The meal-timing principle explains how the time of day in which a person consumes food affects their metabolism. For example, eating very late at night may slow your nutrient uptake and lead to negative health effects.

Circadian rhythm is this schedule by which the body’s internal clock is set. This rhythm keeps the peace in organs such as the liver, where the genes of the internal clock are regulated by nutrients and synchronized by the central clock in the brain. Researchers were surprised to find that the hippocampus, the brain’s center of memory, behaves in a similar fashion. So, the same principle applies—an irregular eating schedule or poor diet may have serious, lasting effects on memory.

“When those two clocks are not working together, metabolic disruptions will happen. One clock remains set to the light, the other becomes set to food. A high-fat diet will disrupt the food regulated clock, and then you have this desynchronization, which is part of the development of metabolic diseases,” Woodie said. “Given the fact that the diet has such a big impact on the hippocampus and that circadian disruptions are a big part of Alzheimer’s disease, looking to see if Western diet-induced circadian disruptions can modulate some of the Alzheimer’s disease risk genes is a major addition to the field.”

According to Woodie, the scientific world was introduced to the details of the body’s circadian clock in the early 1990s and further research has since shown the link between meal times and metabolism. Researchers widely agree upon the idea that a high-fat, Western diet has negative effects on memory. In Woodie’s current research, she combines these two ideas to examine whether Western diet induced rhythm disruptions are a part of the cause of memory disruptions common to diseases such as Alzheimer’s. With her results, further research will know more about the probability of when you eat as a possible treatment of Alzheimer’s.

Based on Kaddoumi’s findings until now, a test compound found in extra-virgin olive oil—oleocanthal, or OC—has shown promising positive effects on the disease pathology. In order to fully analyze how the compound affects the progression of Alzheimer’s, Kaddoumi and Greene are testing the effect of daily OC consumption on metabolic behavior in animals.

“Alzheimer’s is a metabolic disease of the brain. Olive oil is metabolically healthy for you, and it’s thought to be because of the polyphenols, of which OC is one of them, so it reasons to stand that treatment of animals with a polyphenol, that we know is involved in improving metabolism, may be having an effect in the Alzheimer’s animal models. So we’re testing that out for them,” Greene said.

Understanding the interaction between OC and the brain will not only help Kaddoumi’s continuing research in the clinical trials, but findings could also aid in developing OC as a therapeutic or supplemental treatment if concrete evidence is found of its effectiveness to prevent or treat Alzheimer’s.

Olive oil is a key ingredient in the Mediterranean Diet, which Greene has researched extensively and shown proven effects of the diet’s health benefits, such as reduced risk of metabolic and heart disease. The Mediterranean Diet is rich in important vitamins, minerals, antioxidants and fiber, and is recommended by the American Diabetes Association.

“We do know with diabetes, that consuming a dietary pattern like that can be used for treatment,” Greene said. “Whether that can be done with the brain, we don’t know yet.”

According to research, people with type 2 diabetes are more likely to develop Alzheimer’s disease, but the link between the two metabolic diseases is largely unknown.

“Most of the researchers in the neuroscience field believe insulin resistance and impaired insulin-signaling play an important role in Alzheimer’s disease pathogenesis and this has been an area of growing interest,” Jeganathan said. “Recent studies indicate that type 2 diabetes mellitus in midlife is associated with an increased risk of developing Alzheimer’s disease in later life, yet underlying mechanisms remain unknown. We are exploring genes, molecules and cellular processes that could cause and promote Alzheimer’s disease in type 2 diabetes patients to identify these underlying causes.”

Until effective treatment or a cure is found, people can follow certain dietary patterns that are related to reducing the risk of obesity, diabetes, memory loss and cognitive impairment. One of these diets is the Mediterranean Diet, which has shown proven health effects. And, according to a growing body of evidence, the MIND Diet—a hybrid of the Mediterranean diet and DASH diet (which aims to stop hypertension)—emphasizes nutritional habits that are linked to dementia prevention. Observational studies of this diet, which is focused on natural, plant-based foods and limits the consumption of red meat, saturated fats and sugar, suggest that it reduces the risk of developing Alzheimer’s disease by up to 53 percent.

Auburn researchers are also showing promising results related to the link between daytime meal periods and reduced risk of memory loss. Considering the current research, eating a healthy diet on a regular schedule may be the best preventative—and most practical—measure to follow.

Meanwhile, Auburn researchers work tirelessly to find a solution to Alzheimer’s disease, which affects quality of life for millions of families every year.