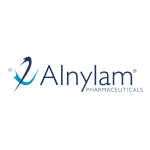 “The first quarter of 2019 and recent weeks were a remarkable period of
advancement for Alnylam toward our goal of building a leading
biopharmaceutical company. Specifically, we demonstrated good progress
in global commercialization of ONPATTRO, continued success in our R&D
efforts with positive Phase 3 results for givosiran, and a strong
commitment to future pipeline growth through our landmark ocular and CNS
disease alliance with Regeneron. In addition, we significantly
strengthened our balance sheet through both an equity offering in
January and partnership-based equity funding and cash that we’ll receive
upon closing of the Regeneron transaction,” said John Maraganore, Ph.D.,
Chief Executive Officer of Alnylam. “We believe we are now well
positioned to achieve our Alnylam 2020 goal of building a
multi-product, global biopharma company with a deep clinical pipeline
for future growth and a robust product engine for sustainable
innovation, a profile rarely achieved in our industry. Moreover, as
evidenced by the success of our ONPATTRO launch and the results of our
givosiran Phase 3 study in porphyria, we believe we’re delivering on our
most important goal of bringing potentially transformative medicines to
patients.”

“In the first quarter, we made significant progress in our global
commercialization of ONPATTRO, as we advanced our efforts to help
patients secure access to this important new medicine. With over 400
patients on commercial product, we’re very pleased with our team’s
launch execution in over 10 countries where ONPATTRO is now available,
and we look forward to continued growth in all existing and many new
countries in the months to come. Of note, we saw strong new patient
demand in the U.S. and EU in the first quarter, beyond the initial
stages of our launch that had been largely driven by conversion of
patients from our expanded access program as well as patients known to
clinical study sites,” said Barry Greene, President of Alnylam. “As we
reported last night, we believe an important highlight in our
commercialization efforts is the innovation we’ve demonstrated with
regard to patient access. Indeed, with 10 value-based agreements now
completed in the U.S. and with favorable HTA ratings and reimbursement
outcomes in key EU countries, we’re advancing our goal to ensure that
ONPATTRO reaches all patients in need.”

“2019 is off to a strong start for Alnylam, as we ended the first
quarter with a balance sheet of $1.3 billion. During the quarter, our
financials were bolstered by encouraging ONPATTRO uptake as well as
proceeds from our January equity financing, and subsequently enhanced
with $800 million in additional cash expected to be received during the
second quarter upon close of our recently announced collaboration with
Regeneron,” said Manmeet Soni, Chief Financial Officer of Alnylam. “This
cash balance positions us for continued execution of potential
commercial launches on a global scale, while accelerating the
advancement of our promising pipeline of late- and early-stage programs.”

Cash and Investments
At March 31, 2019, Alnylam had cash,
cash equivalents and marketable debt securities and restricted
investments of $1.29 billion, as compared to $1.13 billion at December
31, 2018.

In January 2019, Alnylam sold an aggregate of 5,000,000 shares of its
common stock through an underwritten public offering at a price to the
public of $77.50 per share. As a result of the offering, Alnylam
received aggregate net proceeds of approximately $382 million.

Cash at March 31, 2019 excludes proceeds from the Regeneron
collaboration, which was announced after the quarter end and is subject
to customary closing conditions. On a pro forma basis, Alnylam
has cash, cash equivalents and marketable debt securities and restricted
investments of greater than $2 billion.

See “Use of Non-GAAP Financial Measures” below for a description of
non-GAAP financial measures and a reconciliation between GAAP and
non-GAAP net loss appearing later in this press release.

ONPATTRO Revenues, Net
Net product revenues from sales of
ONPATTRO were $26.3 million in the first quarter of 2019.

The Company expects its current cash, cash equivalents, and marketable
debt securities will support company operations for multiple years based
upon its current operating plan.

Use of Non-GAAP Financial Measures
This press release
contains non-GAAP financial measures, including expenses adjusted to
exclude certain non-cash expenses and non-recurring gains outside the
ordinary course of the Company’s business. These measures are not in
accordance with, or an alternative to, GAAP, and may be different from
non-GAAP financial measures used by other companies.

The items included in GAAP presentations but excluded for purposes of
determining non-GAAP financial measures for the periods presented in the
press release are stock-based compensation expense and the gain on
litigation settlement. The Company has excluded the impact of
stock-based compensation expense, which may fluctuate from period to
period based on factors including the variability associated with
performance-based grants for stock options and restricted stock units
and changes in the Company’s stock price, which impacts the fair value
of these awards. The Company has excluded the impact of the gain on
litigation settlement because the Company believes this item is a
one-time event occurring outside the ordinary course of the Company’s
business.

The Company does not provide in this press release a reconciliation of
its estimated 2019 non-GAAP R&D and non-GAAP SG&A expense guidance to
the comparable GAAP measures because it is not able to estimate 2019
stock-based compensation expense without unreasonable efforts. The
Company’s stock-based compensation expense is subject to significant
fluctuations from period to period due to variability in the probability
of performance-based vesting events for stock options and restricted
stock units and changes in the Company’s stock price which materially
impacts the recognition, timing of expense and fair value of these
awards. In addition, the Company believes such reconciliations for its
2019 financial guidance would imply a degree of precision that would be
confusing or misleading to investors.

About ONPATTRO® (patisiran)
Patisiran,
based on Nobel Prize-winning science, is an intravenously administered
RNAi therapeutic targeting transthyretin (TTR) for the treatment of
hereditary ATTR amyloidosis. It is designed to target and silence TTR
messenger RNA, thereby blocking the production of TTR protein before it
is made. Patisiran blocks the production of TTR in the liver, reducing
its accumulation in the body’s tissues in order to halt or slow down the
progression of the disease. In August 2018, patisiran received FDA
approval for the treatment of the polyneuropathy of hATTR amyloidosis in
adults, as well as European Medicines Agency marketing authorization for
the treatment of hATTR amyloidosis in adults with Stage 1 or Stage 2
polyneuropathy.

Infusion-Related Reactions
Infusion-related reactions
(IRRs) have been observed in patients treated with ONPATTRO. In a
controlled clinical study, 19 percent of ONPATTRO-treated patients
experienced IRRs, compared to 9 percent of placebo-treated patients. The
most common symptoms of IRRs with ONPATTRO were flushing, back pain,
nausea, abdominal pain, dyspnea, and headache.

To reduce the risk of IRRs, patients should receive premedication with a
corticosteroid, paracetamol, and antihistamines (H1 and H2 blockers) at
least 60 minutes prior to ONPATTRO infusion. Monitor patients during the
infusion for signs and symptoms of IRRs. If an IRR occurs, consider
slowing or interrupting the infusion and instituting medical management
as clinically indicated. If the infusion is interrupted, consider
resuming at a slower infusion rate only if symptoms have resolved. In
the case of a serious or life-threatening IRR, the infusion should be
discontinued and not resumed.

Reduced Serum Vitamin A Levels and Recommended Supplementation
ONPATTRO
treatment leads to a decrease in serum vitamin A levels. Supplementation
at the recommended daily allowance (RDA) of vitamin A is advised for
patients taking ONPATTRO. Higher doses than the RDA should not be given
to try to achieve normal serum vitamin A levels during treatment with
ONPATTRO, as serum levels do not reflect the total vitamin A in the body.

Patients should be referred to an ophthalmologist if they develop ocular
symptoms suggestive of vitamin A deficiency (e.g. night blindness).

Adverse Reactions
The most common adverse reactions
that occurred in patients treated with ONPATTRO were respiratory-tract
infection (29 percent) and infusion-related reactions (19 percent).

About RNAi
RNAi (RNA interference) is a natural cellular
process of gene silencing that represents one of the most promising and
rapidly advancing frontiers in biology and drug development today. Its
discovery has been heralded as “a major scientific breakthrough that
happens once every decade or so,” and was recognized with the award of
the 2006 Nobel Prize for Physiology or Medicine. By harnessing the
natural biological process of RNAi occurring in our cells, a new class
of medicines, known as RNAi therapeutics, is now a reality. Small
interfering RNA (siRNA), the molecules that mediate RNAi and comprise
Alnylam’s RNAi therapeutic platform, function upstream of today’s
medicines by potently silencing messenger RNA (mRNA) – the genetic
precursors – that encode for disease-causing proteins, thus preventing
them from being made. This is a revolutionary approach with the
potential to transform the care of patients with genetic and other
diseases.

About Alnylam Pharmaceuticals
Alnylam (Nasdaq: ALNY) is
leading the translation of RNA interference (RNAi) into a new class of
innovative medicines with the potential to transform the lives of people
afflicted with rare genetic, cardio-metabolic, hepatic infectious, and
central nervous system/ocular diseases. Based on Nobel Prize-winning
science, RNAi therapeutics represent a powerful, clinically validated
approach for the treatment of diseases with high unmet need. ONPATTRO®
(patisiran) is the first-ever RNAi therapeutic approved by the U.S. FDA
for the treatment of the polyneuropathy of hereditary
transthyretin-mediated (hATTR) amyloidosis in adults and by the EMA for
the treatment of hATTR amyloidosis in adults with stage 1 or stage 2
polyneuropathy. Alnylam has a deep pipeline of investigational
medicines, including six product candidates in Phase 3 studies. Looking
forward, Alnylam will continue to execute on its “Alnylam 2020”
strategy of building a multi-product, commercial-stage biopharmaceutical
company with a sustainable pipeline of RNAi-based medicines to address
the needs of patients who have limited or inadequate treatment options.
Headquartered in Cambridge, MA, Alnylam employs over 1,000 people
worldwide. For more information, please visit www.alnylam.com
and engage with us on Twitter at @Alnylam
or on LinkedIn.