DALLAS, Sept. 30, 2019 /PRNewswire/ — Monarch Waste Technologies, LLC, is a medical and hazardous waste disposal company founded in 2015 by David Cardenas and Kevin Yearout. The company, which is based out of Dallas, Texas and Albuquerque, New Mexico, recently announced that its proprietary technology PyroMed 550TM has secured a “Pyrolysis” designation from the U.S. Environmental Protection Agency and Department of Energy. This designation will enable the company to further develop its technology and expand its operations to other locations across the United States. 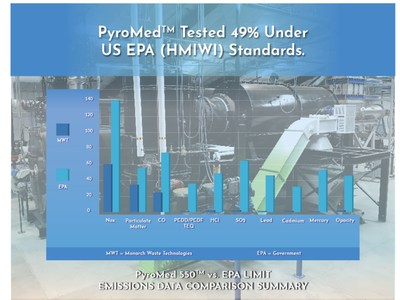 What is pyrolysis?
Pyrolysis is an endothermic process (i.e., a process that requires or absorbs energy from its surroundings) that relies on an oxygen-depleted environment to bring about the chemical decomposition of waste materials. Because there is no oxygen present, the waste never ignites or combusts but rather slowly decomposes as it absorbs heat.

PyroMed 550 TM
Monarch’s PyroMed 550 TM technology harnesses the power of pyrolysis to generate “free” thermal heat. This heat is used to run the unit continually without the need for outside fuel sources. Once in operation, the system is 100% self-sufficient, unlike most other systems which require natural gas or propane. Additionally, excess heat generated by the system is diverted through steam-driven turbines to produce clean energy.

In 2016, prior to commissioning its first unit, Monarch started working closely with the EPA Region 6 and the administrators’ office in Washington to determine whether the PyroMed 550TM fit the definition of pyrolysis—not incineration. Extensive testing by Department of Energy (DOE) experts at Sandia National Labs in Albuquerque was performed to validate pyrolysis.

The DOE issued a final report that validated that PyroMed 550TM was pyrolysis and stated, “…Monarch Waste system is consequently anticipated to significantly reduce emissions of harmful atmospheric pollutants compared with incineration…”

Monarch commissioned its first location in 2017 just north of Santa Fe, New Mexico. Although the PyroMed 550 TM is the first technology of its kind in North America, it is based off of waste disposal designs that have successfully operated in two other continents for over 20 years.

Along with its partners in the United Kingdom, Monarch improved the original design to ensure compliance with the EPA’s most stringent test conditions and emissions limits (HMIWI Subpart Ec). This testing entailed using the most virulent waste mix possible to prove the system could sustain a “worst-case scenario” emissions. During this testing, PyroMed 550TM achieved 49% cleaner emissions than the EPA’s Ec emissions limits and 95% cleaner emissions than the EPA’s Subpart EEE limits allowed for hazardous waste combustors. Monarch and its partners now own the intellectual property rights and patents to this EPA-compliant design.

Monarch’s PyroMed 550TM  offers a solution to the US medical waste issue
In 1995, the EPA inventory for medical waste incinerators listed over 2800 facilities in active operation. Today, there are only eight medical waste incinerators remaining that meet the EPA’s standards. Unlike Monarch, however, these other facilities fail to offer a validated, bankable, and most importantly sustainable solution to the increasing volumes of medical waste being produced by the US healthcare industry. As such, hospitals are extremely hard-pressed to find both economical and clean options for disposing their medical waste.  Although there are other alternative methods in various stages of testing, none have achieved Monarch’s level of governmental validation or years of proven operational success.

After multiple site visits to validate functional aspects of the Santa Fe unit, the EPA issued a final letter to Monarch in June 2019 that stated, “evidence is sufficient […] that the system [PyroMed 550TM] is a pyrolysis unit and produces primarily pyrolysis products, not products of combustion.” This letter went on to determine that the unit would not be designated as a hospital, infectious, and medical waste incinerator (HIMWI) by EPA definition. Rather, the EPA has elected to give a special exemption for pyrolysis as outlined within 40 CFR 60 and 62 rulings regarding incineration of hazardous and infectious medical waste. This designation will allow the regulatory permitting process for other locations to be streamlined from both a time and cost perspective.

A company representative said, “Our first goal was to get the facility built and our system operational so we could actually show hospitals it works. Because up to that point, it was all pictures and concepts, with nothing tangible to show for our ideas. Our next goal was to secure governmental validation and testing to lay the path for faster acquisition of permitting.

This process took more time than we anticipated but considering the impact of what we will accomplish from here, it was worth the effort. Now we are focused on market expansion and our timing could not be better given the need for this type of technology across the country…”

With its novel approach of setting up small scale facilities in proximity to where the waste is actually being generated, Monarch has set itself up to be a leader in revolutionizing how the healthcare sector disposes of medical and hazardous waste. Their environmentally friendly PyroMed 500TM system is the future of clean medical waste disposal and is backed by evidence from rigorous testing by both the DOE and the EPA.

The Company representative further added, “… we are in full development and permitting mode at several strategically selected sites that will serve a customer with operations across the entire United States. We are also finalizing negotiations with an existing customer to execute a long-term contract for a new PyroMed 550TM facility that will serve the needs of their large hospital system in the Midwest after their medical waste incinerator was recently decommissioned…”